The Kennedy Detail is the true story of the critical events leading up to and following the assassination of President John F. Kennedy, told for the first time, from the perspective of the Secret Service agents who had a front row seat to one of America’s greatest tragedies. The story reveals information that has never before been published, including poignant stories that show the close relationships between JFK, Jackie and the agents who protected them, as well as documented evidence that confronts the baseless conspiracy theories that 75% of Americans believe to be true. 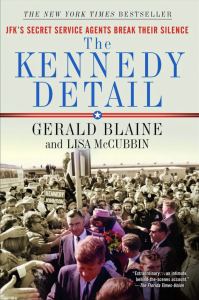 “Of all the books written about the assassination of John F. Kennedy, Jerry Blaine’s The Kennedy Detail is the first book to accurately portray the events leading up to and following that tragic day from the perspective of the Secret Service Agents. It is only because of my enduring friendship and complete trust in Jerry Blaine’s ethics and integrity that I have agreed to provide information for this historically important book.”